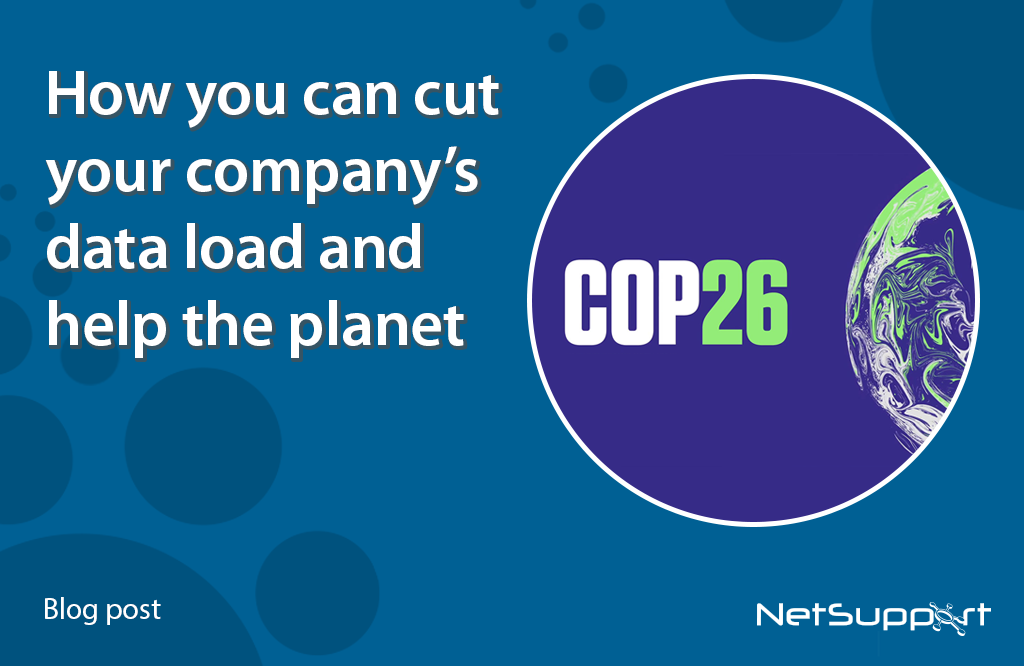 So, we’re approaching the end of COP26 – the meeting with the biggest agenda of all time: saving the planet. It’s not a passing phase; the dangers are all too real, and there will be dire consequences if we don’t come out of this summit with any tangible commitments to change how we all live.

Everyone knows we have to act. But in the main, people feel powerless. On a personal level, we recycle, have our travel mugs, and reusable cotton bags. Some people with gardens collect rainwater and have a compost heap. Others buy second-hand. But, aside from those things, what can we do? Everyone feels the frustration of knowing this is an immense problem, but there are precious few suggestions framed in a way that makes them achievable for everyone.

In this blog, let’s look specifically at the use of technology in our workplaces. It’s innovative, clever, does astonishing things in all sorts of industries but, on the flip side, it uses a heck of a lot of power, its manufacture demands the use of precious raw materials (e.g. titanium, tin, tungsten, gold, and cobalt, the mining of which decimates landscapes and depletes their finite supplies), and the hardware is next to impossible to recycle at the end of its life (often, it just isn’t).

The reality of cloud

It sounds pretty cool to have the company’s data sitting in ‘the cloud’ but that’s not how it is. It’s actually sitting on a server amongst thousands of others in an immense data center, potentially in a country far from where your company is.

Servers generate an awful lot of heat and the centers they reside in need to be cooled, 24/7. This creates a huge power demand, summarised neatly by Wikipedia which says, “A large data center is an industrial-scale operation using as much electricity as a small town.” A small town! And, as the world becomes more tech-driven and more people come online (currently, approximately 60% of the world’s population has access), the more the demand for data centers – and hence the power to run and cool them – will grow. Some companies are trying to lessen their environmental impact by building data centers in cooler parts of the world like Scandinavia or Siberia, but as time passes, it’s just not an option to continue to fill up those places with vast data warehouses.

But what’s this got to do with how we use tech at work?

There’s one habit we can start to adopt which, collectively, could make a small difference. Small, admittedly, but lots of “smalls” together can start to add up to something bigger. It’s along the same lines we’ve mentioned before when we’ve talked about keeping tech apps and content organized for our own sanity, but it’s now thinking about things from a different angle…

Your company is most likely run by technology – ours certainly is! Think of all the data everyone who works there produces in just one day, a week, a month, or a year. It’s all backed up and stored on servers either in your server room or in a data center somewhere. How often is that data reviewed? Does the company really need to keep all of it?

This is where you can help minimize your company’s data load. Your IT team doesn’t know the ins and outs of the files you use in your job, but you do. Do you really need to keep various versions of files that are four or five years old? Do you really need thousands of emails from 2010, 2011, 2012? While they are sitting there, seemingly doing nothing, they’re contributing to the vast volume of data on the server they’re held on. And all the data that’s being held ‘just in case’ is using up precious running and cooling power in whatever data center it’s held in (as much as “a small town,” remember).

So, to support the aims of COP26, consider reviewing your work files and making a call on whether you can delete those you’re never going to look at again. (And then apply the same logic to photos on personal devices!). Yes, it’s tiny, but collectively, it can help. We have to start somewhere. Keeping our data in order can benefit us and the planet.